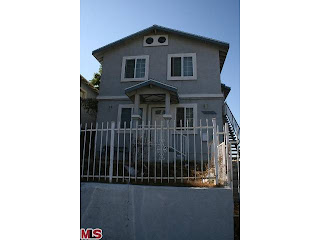 I found an awesome piece of real estate today. It is duplex in Echo Park on a cute cul de sac with sweeping views of Downtown L.A. and specifically Walt Disney Concert Hall all the way to the Hollywood sign. Really gorgeous views. It is right up the street from a brand new city park and it's quiet and secluded yet less than 1/4 mile to the heart of downtown. It is a foreclosure and has been pretty badly vandalized, needing new drywall in several places. It has eight bedrooms, four baths and they are asking 63% of what they foreclosed on. It was built in 2005 which is about 70 years after most of the other properties in the area. The mortgage payment with 20% down would be 2997 so one could pretty easily rent the bottom unit for $2500 and live in the top four bedroom unit with master bedroom views of the Hollywood sign for $500 a month. If THATS not a deal, I really don't know what is.

So what's the downside? Well, to be totally frank the house is FUGLY. That's right, you heard it. Sky Minor called this Echo Park Duplex FUGLY, that means Fing ugly y'all. Although it's new it is not an attractive looking piece of real estate. I won't go into detail here in case the eventual buyer takes offense at the opinion of this broker.
Posted by Sky Minor at 4:16 PM