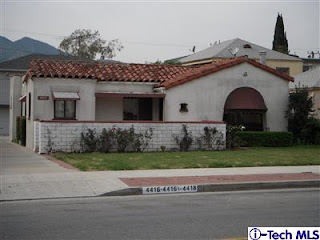 As home prices continue to drop, the rent versus buy equation keeps changing. From "Renters lose edge on homeowners" Wednesday in the Wall St. Journal:

Now, after two years of rapid home-price depreciation, the relationship between the cost of rental payments versus after-tax mortgage payments is tilting toward ownership in a number of metropolitan areas.

"We're not saying on an absolute basis that it's cheaper to own a home, but on a relative basis ... owning is looking much more attractive than it has in a long time," said Andrew McCulloch, a Green Street analyst. While the shift doesn't mean that renters will rush to buy homes soon, "it's not a 'no-brainer' anymore if they're going to rent versus own," he said....

Carla Zeineh, 22, and her husband recently began shopping for a home in Irvine, Calif., and discovered that with a 5% mortgage rate, her monthly payment on a $350,000 two-bedroom home with 20% down could be less than the $1,800 month that they pay in rent on their two-bedroom condo.

Between the $8,000 first-time home buyer tax credit from the stimulus package and the $10,000 incentive for Californians to buy newly built homes, the rent-versus-own tipping point may not be far off for some.

I've got two properties for buyers right now that will both cost less than $1400 monthly including tax and insurance. Both are within 10 minutes of Downtown L.A. and 15 minutes from Silverlake or Hollywood. The time to buy is here.
Posted by Sky Minor at 9:02 PM No comments: