Is NELA (Northeast Los Angeles) blighted? Some people seem to think so and are making waves to improve the area along the LA river. The Community Redevelopment Agency of Los Angeles (CRA/LA) is currently seeking to create a redevelopment project area in NELA. The so-called NELA River Redevelopment Project Area would cover most communities that lie along the eastside of the Los Angeles River, including significant sections of Atwater Village, Cypress Park, Glassell Park and Elysian Valley. The area in question starts at Figueroa and heads Northwest alongside the LA river to Fletcher, then begins again in the north part of Atwater, above Chevy Chase. To be able to create a redevelopment project area neighborhoods within it must be declared “blighted”. Click here for a map of the proposed “blighted” area (pdf file).

When it comes to creating a new redevelopment project area what does “blighted” actually mean? Being a broker of Silver Lake Real Estate, I certainly don't like hearing my home town and my primary area of business referred to in such a context. According to California Redevelopment Law for an area to be considered "blighted” it must be predominantly urbanized and have a combination of conditions “so prevalent and so substantial that it causes a reduction of, or lack of, proper utilization of the area to such an extent that it constitutes a serious physical and economic burden on the community that cannot reasonably be expected to be reversed or alleviated by private enterprise or governmental action, or both, without redevelopment”.

California Redevelopment Law goes on to list the “prevalent and so substantial” conditions that must exist in order for an area to be consider “blighted”. These conditions include;

1) buildings in which it is unsafe or unhealthy for persons to live or work. Including buildings of substandard, defective, or obsolete design or construction given the present general plan, zoning, or other development standards.
2) Adjacent or nearby incompatible land uses that prevent the development of those parcels or other portions of the project area.
3) The existence of small sized lots that are in multiple ownership and whose physical development has been impaired by their irregular shapes and small sizes.
4) Depreciated or stagnant property values.
5) Impaired property values due in significant part hazardous wastes on property.
6) Abnormally high business vacancies, abnormally low lease rates, or an abnormally high number of abandoned buildings.
7) A serious lack of necessary commercial facilities that are normally found in neighborhoods, including grocery stores, drug stores, and banks and other lending institutions.
8) Serious residential overcrowding that has resulted in significant public health or safety problems.
9) An excess of bars, liquor stores, or adult-oriented businesses that has resulted in significant public health, safety, or welfare problems.
10) A high crime rate that constitutes a serious threat to the public safety and welfare.

To buy or sell property in NELA, contact Sky Minor at his website for Silver Lake Real Estate.
Posted by Sky Minor at 11:18 AM No comments:

If this was your view would you ever leave the toilet? 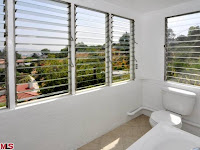 Check out this house in Mt. Washington right up the street from one I just sold. This has to be one of the most amazing bathroom views I've seen (especially for $450k). If I had this view in my lavoratory I could see myself spending quite a bit of time relaxing on the latrine. I would become like John Travolta's character in Pulp Fiction. I might even move my office in there.