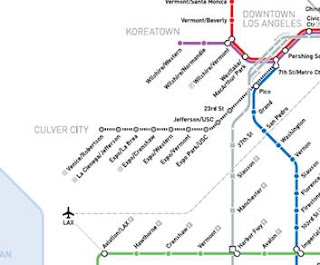 An astute client of mine who is on his way to cashflow early retirement pointed out to me that the LA Metro rail is adding a new line. The expansion starts downtown, goes through USC and then heads West along Exposition into Culver City and the West side of LA. This will make many older, affordable rental properties accessible to a Metro rail stop. This is a very good thing! Usually when a metro rail line goes through a neighborhood the property values increase. The Los Angeles MTA site has some good case studies to validate that point. From what I've seen in the areas near the recent Gold Line expansion in Cypress and Highland Park, rail service can turn around a blighted area. Once people can get to their jobs downtown on the train, they start moving into the cheaper areas and renovating the older properties there because the cost of living is lower. Soon the area sees a notable uptick in both rental and sale prices because of this demand to live near a rail station. The truth is that LA is a city with an underdeveloped public transportation system. Although it is still tough to live here without a car, with the additions of these rail lines it becomes more feasible to get by without one. Public transportation gives more people access to more things which leads to more trade which is good for everyone. As oil prices will continue to climb more people will be able to rely solely on the metro to get around (as it is with most other big cities).

On an quasi related interesting historical side note, Los Angeles once had the nations most advanced railway car line, The Los Angeles Railway. You could get from East LA to downtown all the way to San Pedro, up to Pasadena and into Hollywood and Mid City. The line was owned by railroad tycoon Henry Huntington and the dual gauge cars ran until 1945.
The Los Angeles Railway was rumored to have been bought out by Henry Ford and a tire company bit

by bit and immediately dismantled to force Californians to buy their automobiles. True or not, LA has had a sorry lack of rail transportation since then until the 21st century. It would be great to see a return to rail in the Southland for a myriad of reasons, but the one that I'm writing about here is added value for everyone living in LA. Rail lines are a great way to add value to a property for yourself and your tenants, so I'll see you all out savvy buyers out there on Exposition Blvd.

The very heart of your writing shilst sounding agreeable at first, did not settle very well with me personally after some time. Someplace within the paragraphs you were able to make me a believer but just for a while. I nevertheless have a problem with your leaps in assumptions and one would do well to fill in those breaks. In the event you actually can accomplish that, I will definitely end up being fascinated.
Its such as you learn my thoughts! You seem to grasp so much approximately this, such as you wrote the ebook in it or something. I think that you simply can do with some% to force the massage house a bit, however other than that this is magnificent blog. An excellent read. I will certainly be back.
real estate