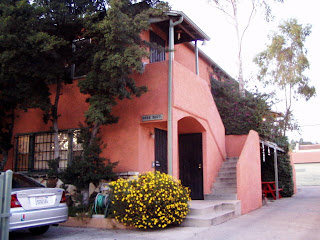 I initially had a very difficult time with hyping myself up. Usually when I would meet people who would boast about their accomplishments I would retract from them and thought that they were either exaggerating or totally unconfident with themselves and trying to compensate. In many instances, both. Over time I've come to realize that it is sometimes appropriate and even necessary to toot your own horn, and this opinion is echoed by Trump, Doheny and many other influential tycoons. After all, if you don't tell the world about what a terrific job you are doing then who will?

So without further ado, I will commence with the gratuitous self-promotion. I took a listing on a gorgeous four unit building in Highland Park right on the York Blvd. strip behind the York and Johnny's bar, a place I have known to patronize. The clients wanted to get the equity out of their property to buy a retirement house in Norcal and were either going to refinance it and hold it or sell it, cash out and then 1031 into their new property. After evaluating the financial health and general state of the real estate market we decided that it's not going to hit massive growth again anytime soon, if at all so holding off five years for a higher price and refinancing the property now didn't make sense. We decided to sell the four unit. I looked around for comps in my own area (I live here to, you know). Everything was either a beat up REO or drastically overpriced so I approximated $/sq. ft based on the two blocks north and south. The area is important to the future valuation of the property because real estate is defined as it's future earning potential so I needed to keep my valuations constant with what's on the block and what that is renting for. I came up with a figure in the high 400's and presented it to the owners. They were thinking more in the low 500
s, but I showed them the state of the market and especially the mortgage world and they understood that the pool of qualified buyers has been reduced by about 60% for this type of small apartment building. We agreed on a listing price of $499000 and I set out to snap some pictures, meet the tenants and hang my sign. After day one my pictures were up online and the MLS. I take pride in the fact that I maximize online exposure for my listing. (Just google 5025 Lincoln or 6412 Enfield). I was instantly flooded with calls and offers. In the afternoon on day two, I had a full priced offer from someone who lived two blocks away from the building. I presented it to the amazed sellers who instantly got giddy about their plans to retire becoming a reality. We had a deal in under 48 hours. Now THAT'S hot especially in this market and that's why I am the hottest Broker in L.A..
Posted by Sky Minor at 11:36 AM